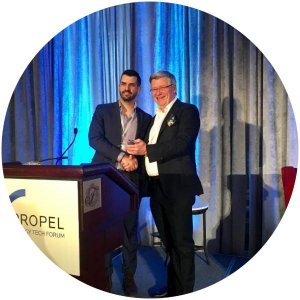 Montreal, July 19, 2021 – We are deeply saddened to announce the death of Mr. Jean-Michel Gires, a member of our board of directors, on July 18. Mr. Gires had served on our Board of Directors since 2018. He was mostly known for his strategic advice to startups he took under his wing, including Pyrowave, since his retirement as CEO of Total Canada a few years ago. He was very active in the Propel Group, which supports innovative energy technologies with an environmental impact. Mr. Gires was instrumental in developing Pyrowave's business strategy at a key time in Pyrowave's growth. This is a tremendous loss and he will be greatly missed by all in the Pyrowave family.

Very creative and endowed with an uncommon artistic sense, Mr. Gires had started the By Jean Michel collection, his upscale scarf and accessory business. He had developed a silk printing technique and used the pictures taken during his numerous trips around the world.

“I met Jean-Michel when he presented me with the Propel Award in 2018, and we immediately developed a high degree of complicity, which led to his involvement on the Pyrowave board. His love for the arts, combined with his extensive business experience, meant that he brought a very unique perspective. In addition to his valuable advice, I will remember him as a man with a rare elegance of heart and deep humanity”, said Jocelyn Doucet, president and co-founder of Pyrowave.

He is survived by his wife, Mrs. Agung Nugrahaeni, and five children. We offer our deepest condolences to the family on the loss of an outstanding person.

About Pyrowave
Pyrowave is a pioneer in the electrification of chemical processes based on low carbon footprint microwaves. Pyrowave is also a leader in the plastics circular economy and chemical recycling to regenerate post-consumer and post-industrial plastics into new plastics, reclaiming these resources’ full value. Its patented high-powered microwave catalytic depolymerization technology platform is the most advanced in the world and is now at the forefront of the next generation of plastics. By restoring plastics to their molecular state identical to virgin materials, Pyrowave technology enables infinite recycling of plastics and provides a circular economy solution to meet the global plastics recycling challenge.
Share on: